For information about health and care in Leeds please follow healthandcareleeds.org.

This site is no longer updated and will be shutting down.

Jacqui Cain, 33, was diagnosed with cervical cancer when she had her cervical screening test at the age of 27. She is now encouraging local women to attend their test so that the disease can be picked up and treated at an early stage. 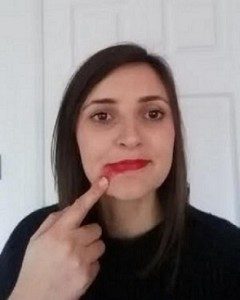 As part of her backing for the awareness week, Jacqui has taken a ‘selfie’ with her lipstick smeared across her cheek (pictured left). This is part of a national campaign by Jo’s Cervical Cancer Trust called #SmearForSmear. The campaign encourages people to share their selfies on social media to remind women to attend their cervical screening test.

Since her diagnosis and subsequent treatment Jacqui has taken on the voluntary role of support group leader in Leeds for Jo’s Cervical Cancer Trust.

Jacqui Cain, Cervical Cancer Survivor, said: “My advice to other women would be that if you’ve been invited for your cervical screening test, make sure you make it a priority and book your appointment as the test can help to save your life. Cervical cancer is the most common cancer in women aged 35 and under, and by backing Jo’s Cervical Cancer Trust #SmearForSmear campaign we will be raising awareness of cervical cancer and prevention.
If women in Leeds, who have been diagnosed with cervical cancer or have undergone treatment for it, want to meet other women who have been through the same journey they’re welcome to come along to our support group meetings. The meetings take place once every six weeks at the Leeds Trinity Shopping Centre.”

Phil Corrigan, Chief Executive at NHS Leeds West CCG, said: “Having regular cervical screening can protect you against cervical cancer. The symptoms of cervical cancer aren’t always obvious and may not cause any symptoms at all until it has reached an advanced stage, which is why you must attend your test.

The screening is offered free on the NHS, as long as you’re registered with a GP who must have your current address on file. If you’re unsure or worried about the test you can speak to your GP or practice nurse who will be able to answer any questions you may have.”

Figures from Jo’s Cervical Cancer Trust suggest that eight women are diagnosed with cervical cancer and three women will lose their lives to the disease in the UK every day. To improve the chances of spotting cancer early there is a national screening programme for cervical cancer which saves around 5,000 lives a year. The programme invites women aged 25-49 for a screening once every three years (once every five years for women aged 50-64).

The charity has also said uptake of cervical screening is now going down year on year. Local figures for Leeds from the Health and Social Care Information Centre reflect the national trend. In 2014 75% of women in Leeds attended their cervical screening test and in 2015 74.5% women attended.

Most of cervical cancer cases are caused by the human papillomavirus (HPV). HPV is a very common virus; at some point in our lives most of us will catch the virus. Worldwide, HPV is the most widespread of all sexually transmitted viruses; four out of five (80%) of the world’s population will contract some type of the virus once in their life.

If you experience any or all of the above symptoms, or concerned about any new symptom it’s important that you make an appointment to see your GP as soon as possible. To find out more about the cervical cancer screening programme please visit: www.nhs.uk/cervicalcancer

Interviews with Jacqui Cain are available on request. To arrange an interview please contact the communications team at NHS Leeds West CCG. You can contact the team on 0113 84 35528 or 0113 84 35470. Alternatively please email us: commsleedswestccg@nhs.net

Jacqui Cain, 33 years old, was diagnosed with cervical cancer in 2010 at the age of 27 after an abnormal cervical screening result.

“When the results came back from my test I was diagnosed with cervical cancer and I had successful surgery which involved a cone biopsy and lymph nodes removal. During my diagnosis and treatment I felt alone and found it difficult to find information about cervical cancer. When I visited Jo’s Cervical Cancer Trust website I found it very helpful to understand cervical cancer, its causes and treatment.

“Three years after my diagnosis I became a support group leader in Leeds for Jo’s Cervical Cancer Trust. I did this because I wanted to help other women who had been diagnosed with cervical cancer and wish something like this had been available during my diagnosis.

“The Leeds cervical cancer support group is there to support women who have been newly diagnosed, those going through treatment and post treatment. It’s a great way for women to share their experiences and have face to face support including advice on side effects from treatment. The group meets once every six weeks at the Leeds Trinity Shopping Centre in a meeting room which the shopping centre has provided for us. There are four women who regularly attend the group and two to three times a year we also have a cancer nurse specialist from St James’s Hospital who attends the group. The cancer nurse specialist talks about certain procedures, side effects of a treatment for cervical cancer and there’s a questions and answer session as well. For me the group has been such a big achievement as it took a while to establish but it has now been running successfully for two years.”

Follow Jo’s Cervical Cancer Trust on Twitter @JoTrust using #CCPW or visit their website http://www.jostrust.org.uk/You can also call their national helpline for information and support on 0808 802 8000

For further information on the national screening programme for cervical cancer, visit: www.cancerscreening.nhs.uk/cervical