From 1 July 2022, NHS Leeds CCG will become part of NHS West Yorkshire Integrated Care Board. We will continue to work with health and care colleagues  to improve outcomes for people in Leeds and across West Yorkshire.

The changes mean that from 30 June, this website will be archived and will no longer be updated. A new website for the Leeds Health and Care Partnership – www.healthandcareleeds.org – will be launched on 1 July.

Local NHS leaders are supporting the 16 Days of Action, an international campaign which runs from 25 November to 10 December. The campaign aims to raise awareness about the issue of domestic abuse and encourages more people to do something to tackle it.

The latest statistics on the White Ribbon UK website show that two women a week are killed by a current or former partner and 10,000 women are sexually abused ever week [i]. 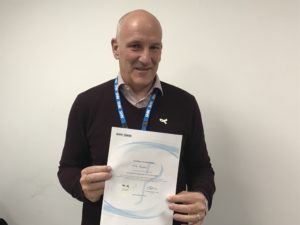 Tim said: “I became a White Ribbon Ambassador because I want to make a difference and we all have a role to play in ending male violence against women, once and for all. I’m encouraging Leeds men to become ambassadors as well as my friends and work colleagues, so that they can take the message out there, whether it’s at workplaces, schools, universities or colleges, all of us can play a part in making a difference. The more men that we have signed up as ambassadors, the stronger our message will be.

“The pilot encourages GPs to ask women patients who attend alone if they’re experiencing domestic violence and abuse. They are then offered a referral to an Independent Domestic Violence Advocate (IDVA), and a referral to the MARAC (Multi-Agency Risk Assessment Conference) is made if the individual is at risk of serious current or future harm. MARAC meets daily in Leeds where workers from a number of agencies discuss the safety, health and wellbeing of the individual and their family. Although the pilot was only for three months, we’ve continued with it for the past two years, as we found that 18% of our female patients were experiencing domestic abuse or had experienced this in the past.

“Due to the success of the pilot, it will now be further rolled out across small number of GP practices who have been identified as having the highest numbers of domestic violence homicides or instances of high/medium risk domestic violence and abuse. CCG has further invested which funds a nurse to attend the MARAC. I want to thank Safer Leeds Domestic Violence Team who have been integral to this pilot and making it a success.”

Full details of how you can support the campaign are on the White Ribbon UK website (www.whiteribbon.org.uk). The CCG will actively encourage people to become ambassadors, champions or to make a pledge on Thursday 29 November at their Wira House headquarters, where they will also be encouraging other businesses to take part too.

For media enquiries please contact the communications team at NHS Leeds CCG. You can contact the team on 0113 84 35528 or 0113 84 35470. Alternatively please email us: leedsccg.comms@nhs.net